The Speedo Node JS package is a tool that allows you to enter a simple command from a command line to measure basic performance of your Sauce app and validate any regressions based on previously executed tests. Speedo also easily integrates with any CI system, allowing you to plug Sauce Performance into your pipeline and start capturing performance within seconds.

You can install the Speedo package for Sauce using NPM or Docker.

Install the package on your system to make the speedo command available.

The Speedo commands require your SAUCE_USERNAME and SAUCE_ACCESS_KEY. Export the values into your environment in order to avoid passing them as parameters each time you call a Speedo command. For example:

The Speedo run command initiates a series of tests on Sauce Labs against a single URL defined in the query and returns the corresponding performance results. As part of the execution, the command facilitates the following functions:

Kick off a Speedo test by calling:

The output returned for a passing test may look as follows: The Speedo analyze command allows you to compare the performance of multiple URLs that are accessed by a test script performed using automation tool like Selenium or WebdriverIO. Once the test completes, run the analyze command, specifying the name of the test as an inline attribute, to evaluate the page performance for each of the URLs accessed during the test. For example, a Login test would include each of the URL pages associated with successful authentication.

The specified test must have the appropriate options set for Performance.

You can apply parameter specifications to customize the test execution either by including the parameters as inline arguments or through a config file (speedo.config.js) located in the directory from which Speedo is called. Following is a list of common inline arguments.

Before you analyze the performance of page loads in an automation script, make sure you have a named test that has run to completion.

The following example is based on a WebdriverIO test in which a user logs into Instagram and successfully accesses the home screen.

The following screenshot shows an example of the returned output for the analysis of the automation test. 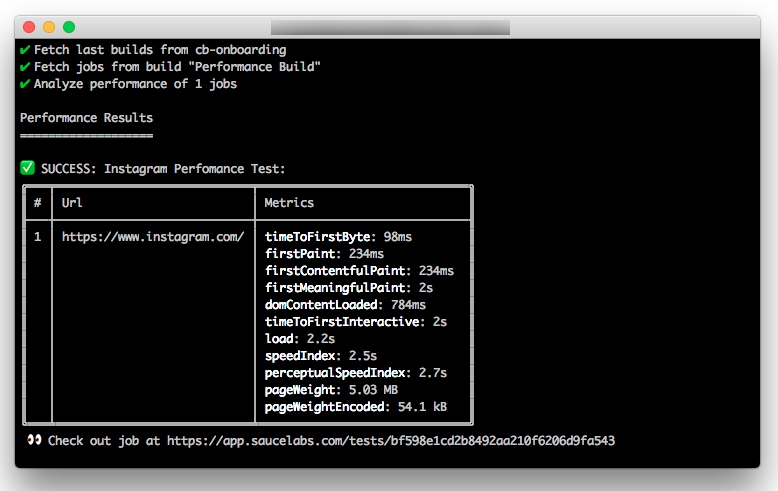 Integrating with a CI Pipeline​

The Speedo package is designed to organically fit into your existing continuous integration pipeline, as illustrated in the following examples.

This example uses a sauce attribute to pass the Sauce Labs credentials into the environment.

This example defines a Speedo Docker container and validates that Speedo is available.

By default, Speedo downloads a log containing all the recorded metrics for your test in a local file, the path to which is provided in the output of the call. If you prefer to specify a different location, use the --logDir (-l) parameter. You can also include the --traceLogs (-t) parameter to generate a log with trace level details in addition to the standard log in the same directory location. The following example is highlighted to show the parameter settings in the command and the log location in the output.

Once the test has completed, you can access the data for further use, such as pushing it to a third part analysis service.

The Speedo CLI tool supports a high degree of customization to ensure you are only capturing data that is relevant to your organization. You can customize the execution of either Speedo command by passing applicable parameters:

The following values can be used with the -m parameter of either the run or analyze command.

Detailed metric values can be found in the performance.json log file. This file is generated when speedo is run with -l parameter.
The log file consists of the following metrics:

The following profiles can be used with the --throttleNetwork parameter of the run command to simulate various network conditions for your test.

You can configure your test to run under the network condition of a predefined profile from the table, as in the following example:

Alternatively, you can specify custom values in the format download, upload, latency (in KB/s):

The following profiles can be used with the --throttleCpu parameter of the run command to simulate various load conditions for your test.